San Francisco, 1906: Fifteen-year-old Mercy Wong is determined to break from the poverty in Chinatown, and an education at St. Clare’s School for Girls is her best hope. Although St. Clare’s is off-limits to all but the wealthiest white girls, Mercy gains admittance through a mix of cunning and a little bribery, only to discover that getting in was the easiest part. Not to be undone by a bunch of spoiled heiresses, Mercy stands strong—until disaster strikes.

On April 18, a historic earthquake rocks San Francisco, destroying Mercy’s home and school. With martial law in effect, she is forced to wait with her classmates for their families in a temporary park encampment. Though fires might rage, and the city may be in shambles, Mercy can’t sit by while they wait for the army to bring help—she still has the “bossy” cheeks that mark her as someone who gets things done. But what can one teenage girl do to heal so many suffering in her broken city? Goodreads. 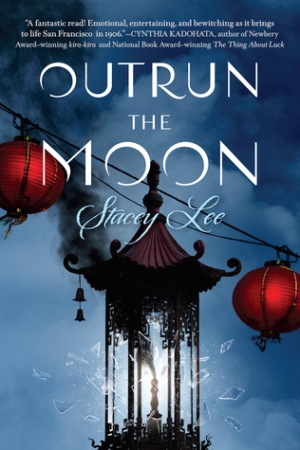 “I manage to find two Abbiati salamis and stuff one up each sleeve. This will impede movement, but as long as I remember to hold my sleeves, I can keep them from shooting out. Into my boots, I slip wooden spoons. I hide two oranges, well, in the most logical place to put two oranges. No one will be the wiser. Last, I jam two packets of cheese into my pants pockets.”

What did I think about the book?

This book, apart from Dan Brown’s, is the first in a long time not having fantasy elements in it. I had to get used to it for a bit. But when I got into the story I remembered I love these kind of stories too!! This book was amazing. Not only were the story, world and character building done outstandingly, Stacey talked about some topics that are hard to talk about even in present time.

This was a story about apartheid in America. Where the Italians were seen as lesser people, and Chinese as beasts. This is a story about a Chinese girl fighting to show the world she isn’t any less, she may even be better than most including men. A story where racism is a huge part of daily life. Where, after a natural disaster, the Chinese girl can unite the people and show they are equals and need to stay strong together. A story about a good marriage and real love.

Stacey also made the story humourous, I loved it. Even two girls who are classes apart from each other, forced to keep secrets and don’t like each other, will eventually come to an understanding over a moment of humourous events. It’s a long quote, I know, but it shows funny moments and how two girls who are hostile towards each other can unite in emotion.

“I roll and roll, managing to find every painful rock or stick this knoll offers. Elodie finds them, too; I can hear each of her yelps a few moments after mine. My head continues to spin even after I’ve stopped rolling. So this is how it feels to be bread dough.

Something lands on top of me, and then another something follows, shrieking loudly in my ear.

Elodie and I lie heaving in a tangle of limbs, bruised and bloodied. The sky looks like the eight-treasure juk I once made of black sesame and millet. I boiled it too long, and it became eight horrors, with little specks and brown clots floating in the ashy liquid.

After a moment, I sit up with a grimace and pick hay from my hair. Lincoln street lies twenty feet to my left. Elodie shakily sits up as well. Grass stains cover her uniform, and one sleeve has torn away from her dress under the arm. a clump of mud sticks to her ear, and there’s a reddish-purple bruise developing on her cheek.

A sneeze wrecks her body. She managed to hang onto her purse, and from it, she pulls out her peacock handkerchief that she embroidered for the Wilkes boys. She dabs at her eyes, blots her face, then finishes the job with a loud honk. When she’s done, she stares at me. “Tell me I don’t look like you.”

“You don’t. You look worse.” I glance at the meat, which is lying in silent repose between us. “But not as bad as him. You think he cracked any ribs?” Her face twitches, and then a smile elbows its way out. Her shoulders begin to quake, and I realize she’s laughing. It’s as contagious as applause. We snort and guffaw, seized by a kind of fit that is hard to shake off.

“So that’s -” She tries to get it out, but another wave of laughter shivers through her. “That’s” – gasp – “how you make a rolled rump roast!”

A fresh wave of giggling consumes us, and I wipe tears from my eyes. Oh, Jack would’ve laughed to see me at the bottom of this knoll covered with grass and bested by a beef. Before I realize it, my throat tightens, and the tears of laughter run bitter. I dreamed of the day I could afford to buy Jack not just the bones of the ox, but the meat, too. Now that day will never come. His bowl will never again need filling.

To my surprise, Elodie begins to weep, too. How fine the line is between hilarity and grief. I’ve seen it happen at the cemetery, where in the middle of a service, someone will be hit by a funny thought, and then the laughter will spread like wildfire, made funnier by the inappropriateness of it all. Maybe sorrow and its opposite, happiness, are like dark and light. One can’t exist without the other. And those moments of overlap are like when the moon and the sun share the same sky.

A middle-aged couple has stopped to stare at us. The woman puts a black-gloves hand to her mouth and turns her wide eyes to her husband. Untucking his arm from her, the man crosses the lawn to us. Elodie stops crying and begins to quietly hiccup. The man’s horrified gaze flits from the bloodied burlap sack to each of us, with our puffy eyes and tear-stained faces. “We’re so sorry for your loss. Take this, and God bless.” The man tucks a five-dollar bill in each of our hands, then hurries back to the woman. He thinks we’re mourning a body. The woman twists her head back a few times as they leave. Elodie stares at the money in her dirt hand, then lifts her astonished eyes to me.

I smile, and she grins back. It’s funny how one little moment of truth can undo hours of hostility.”

I admire Stacey for the way she shows us the tragedy after a catastrophic event like that in 1906. I like that she used an actual historic event for her story to be written around. It makes me feel this is something that could’ve actually happened. I hope some Chinese girl fought for herself in 1906 like Mercy did in this novel. The story was very descriptive, not only of the events happening – like buildings collapsing and raging fires – but the effects on people and their feelings. How it affected a whole community, not only the poor in shabby houses. How it brought together a whole community like we see happening every day.

Why I didn’t give it the full 5 quills is because the pace was a bit slow before the catastrophe. From the time she attended St. Claire’s till the earthquake it felt like time was going so slow. I had difficulty keeping up there. I like fast paced books, because they can hold my attention – I’m easily distracted hehe – and I will keep reading. But with slower bits of story I start multitasking and I read and play Candy Crush at the same time…. But that slow part was around 30-45% into the story… The rest of the book I did really like. I know the slower part was important so it’s not a bad thing, but it makes it more difficult to keep focussed on reading…

I did have some questions after reading this story: When Mercy sees Ah-Suk and Headmistress Crouch together I wondered if they’d adopt Mercy on the end because Ah-Suk only speaks Cantonese and Headmistress Crouch only English. [I correct myself, because I thought he didn’t speak English while treating the Headmistress, but later on they are talking to each other, how I don’t know, because I thought they had a language barrier…]

7 thoughts on “Outrun the Moon.”